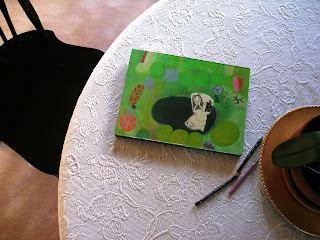 Acrylic on wood- Daydreaming girl, but the actual title is 'making things happen' 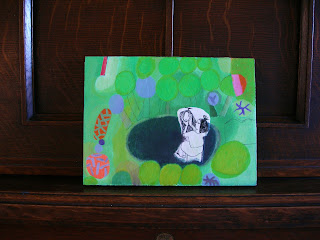 I struggled with this one for a long time- I realise now that more often than not my* intuitive mind* is steps ahead of my* thinking mind*- I just have to learn to trust that- Making art then is truly a matter of exploring and inventing- a series of *unexpected events* not *things as usual*... 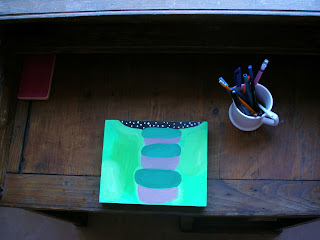 This one started off complete with little red riding hood and a big bad wolf, only to lose all the figures on the way and end up with just he bare shapes, which actually pleases me terribly- 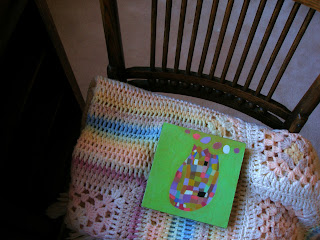 This is playing- a favorite- 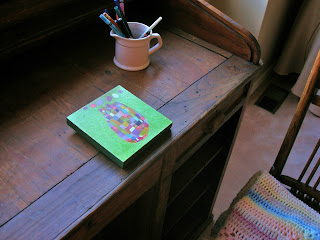 The desk is also a big favorite. It was made by my great-grandfather for my mother when she was a little girl.
He had it painted a very light blue which I might still paint it as well. Hmm.
When my great grandfather was a young, tall, handsome, blondish man (so I am told), he travelled in Northern Greece with a group of furniture makers. In a small town (which is now part of Bulgaria), he fell in love with a pretty, tiny woman who was a school teacher. When he asked her mothers' permission to marry her daughter, he was rejected, because he was *only a travelling craftsman*. So, he went to Istanbul and built himself a thriving furniture business which eventually became a factory.
He went back and married his sweetheart. They had six children. They lived until they were both over a hundred years old, and when he died she lay in bed and died a couple of months later.
So, I love this desk.
Hugs-
Posted by annamaria annamaria potamiti at 10:49 AM

pieces are so lovely my friend ..and the desk with a story..so endearing

Love the trees in it!

Thank you Elk, and Julie-xx

gorgeous work! do you love working on wood??
love the story too. sad how people had to prove themselves! but a happy ending :)

These are wonderful works, Annamaria - I love how vibrant they are! Divinely gorgeous story too :) Kx

annamaria, you are the queen of greens! no color makes me more difficulties than green...
love the perspective on the painting with the little lake. and the love story is heartbreaking beautiful.
julia

Love your work, and it's true what you say about 'intuitive mind', me too I feel my best work is made when I let things happen and appear without too much thinking.
Beautiful composition and colors,these works give me a happy feeling.
The love story of your great- grandparents is touching and lovely, no wonder you cherrish the desk.

Love those little pieces of delight you are creating and of course, your story of the desk is so wonderful...thanks for sharing! I totally relate to that little dance of the thinking mind and the intuitive mind!
Thanks so much for your wonderful posts! Patti

Dear Anna Maria,
what a wonderful lovestory! So your name is the alliance with your past, maybe.
Gorgeous Pictures.

Oh that story about your great grandad is so touching. Thanks for sharing it. It amazes me how you wrangle with pictures till they work - I think I'm a bit too easily pleased or lazy!

what a love story. i LOVE the paintings. :)

have I said that I simply love your art! well, now I did! take care.