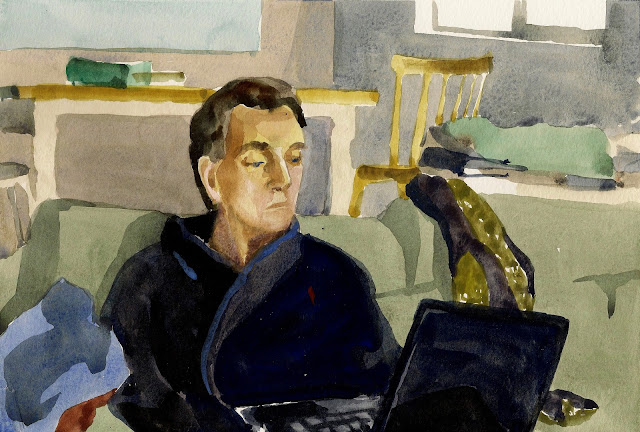 Day20- Working from home
watercolor 8,5 x 11 inches
So now I know that I need to have an 'emotional' response to something in order
to choose to paint it.
Which reminds me that when I was a girl my mom often said that while I never studied for my piano lessons I still played well because I played with emotion.
I wish I had studied.
Because emotion is not enough. I used to 'freeze' during rehearsals but  if
I had practiced long enough my hands would have remembered...
Of course, practice means becoming accustomed to failure upon failure upon
failure, as long as it takes to get it right. I didn't know that then.
Being unable to
get anything done well early on in the game was proof I just 'didn't really have it'.
Which is when emotion becomes all twisted and traps you inside.
A few decades later I can finally use emotion to 'move' me in the right direction, because I know that  my friend 'failure' will take me there.
Hugs-

Posted by annamaria annamaria potamiti at 10:59 AM

Wonderful insight! Annamaria.
And I've really been enjoying your "life at home" series :)

Thank you Kristen. It was about time I figured this one out!!!LOL

I really like the way you think
I wish I also new that when younger
Maybe that's the way it is
We need to get older first to see failure as a positive
thing. Something that will move us forward...